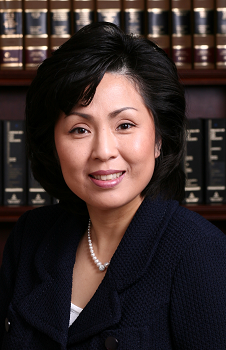 The Law Offices of Yun Jung Yang, LLC is a Rockville, Maryland-based boutique firm specialized in the practice of immigration law. Ms. Yang has more than two decades of experience providing immigration-related legal counsel to domestic and foreign companies and to foreign investors. She has also helped thousands of foreign nationals navigate the roads to residency and naturalization in the United States. Recognized for her extensive knowledge of this area of law, Ms. Yang has been invited to speak on immigration matters at numerous international and domestic forums.

Ms. Yang is active in the community and currently serves as a Chair of the Maryland Commission for Women, Chair of the American Red Cross – National Diversity Advisory Council, Executive VP for the Korean American Women’s Society and Board of Director for The Maryland WAG Foundation: The Funds for Maryland’s Women and Girls. She served as the Vice-President of the National Unification Advisory Council of The Republic of Korea (2013-2017), Commissioner for the Maryland Governor’s Commission of Asian Pacific American Affairs (2011-2015), President of the Korean American Women’s Chamber of Commerce (2011-2012), and Commissioner on the Montgomery County Commission for Women (2002-2008). As a Commissioner, Ms. Yang focused on raising awareness of the special needs of immigrant women to policy makers and service providers in the State of Maryland and Montgomery County. From 2002 through 2003, Ms. Yang served as a Legal Advisor to the Washington, D.C. office of KOTRA (Korea Trade-Investment Promotion Agency).

In November 2018, Ms. Yang received The Rita C. Davidson Award, the highest honor given by the Women’s Bar Association of Maryland. In 2006, she received The Women of Achievement Award from the Montgomery County Business & Professional Women.

Ms. Yang received her J.D. from Howard University School of Law and is admitted to practice law in Maryland and the District of Columbia. She is fluent in English and Korean.