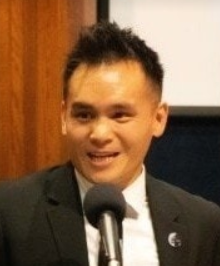 Office of the Assistant Secretary of the Navy for Research, Development and Acquisition

Nick Tran specializes in strategic partnerships and program management for Government, non-profit, and international organization. He currently works on staff at the Office of the Assistant Secretary of the Navy for Research, Development and Acquisition (ASN(RDA)) at the Pentagon, providing health assessments and program status to senior leadership for Major Defense Acquisition Programs (MDAP) across the entire U.S. Navy and Marine Corps enterprise. He also serves as the Product Manager for the modernization of the RDA Information System, the Navy’s authoritative system that tracks and manages all of the MDAP information across the enterprise. Prior, he was a program manager for the U.S. Navy Program Executive Office for Aircraft Carriers at the Washington Navy Yard, serving as a one of the Project Managers that delivered the USS GERALD R. FORD (CVN 78), the $12.9 billion first-in-class nuclear-powered supercarrier, and then as Deputy Assistant Program Manager for the nuclear reactor refueling and the complex overhaul on the USS GEORGE WASHINGTON (CVN 73), which is a four year and $5 billion program. Nick started his career with U.S. Department of Defense in San Diego, CA through the Pathways Program, negotiating proposals and managing contracts in support of U.S. Navy ship maintenance and modernization programs with a total portfolio value of $500M. Afterwards, he served as a diplomat for the U.S. Army Saudi Arabian National Guard Modernization Program in Riyadh, assisting the Saudi Arabia Ministry of National Guard (MNG) with their aviation program, successfully negotiating a $200M multi-national contract to provide aviation training for MNG pilots and technicians.

Nick is a member of the Board of Directors for the Conference on Asian Pacific American Leadership (CAPAL), a non-profit that provides public service opportunities for Asian American, Native Hawaiian, and Pacific Islander college students, having recently lead a team to win a five-year contract with the Department of Veteran Affairs to provide them with interns. He is also part of the advisory board for the Washington, D.C. Chapter of the National Association of Asian American Professionals (NAAAP-DC). Nick co-founded a grassroots international development non-government organization, providing resources and services to community based organizations in developing countries with a team of over 70 volunteers. Possessing a B.S. in Economics from George Mason University, he received various public service honors to include Congressional Recognitions and Flag Officer awards, as well as the U.S. Army Superior Civilian Service Award, the U.S. Army’s third highest civilian honor.